Count down to the big rains has started. Up to now it has been a question of preparation, which is rapidly morphing into a matter of necessity. Our well is dry. We have had a number of nights where the rains have come for a while but the ground is soaking it all up greedily and there appears to be little effect on the water table. Most of the Tinacos are full so we have a few weeks grace. If the rains hit the mountains we will be good but for now our 20M well is not quite deep enough and the rivers, streams and well remain stubbornly water free.

Friends arrive from Baja on their honeymoon! Surprisingly it costs many times more in airfare from Baja Mexico than from just about anywhere in the USA. Cheaper to fly to Hawaii but we have an epic romantic destination here made even more wondrous by the earth shifting on it’s axis and allowing England to win a World Cup penalty shoot out. Best honeymoon ever! 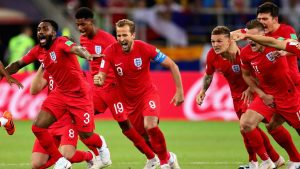 The longest day is behind us and the sun is moving along the sky nicely. Just before sun drops we have about 10 minutes of a strange and slightly surreal sepia glow that surrounds us. It’s like someone puts a filter lens over your eyes. It’s pretty as hell but quite odd.

Jayne has a new toy. There is an inexplicable presence of giraffes in Mexico. The Mexican giraffe is not something I have heard of but there are countless carvings and beaded art crafts and paintings of giraffes offered at every corner here. There are inflatable giraffes , giraffe whistles, giraffe T shirts and most recently seen puppet giraffes sold at traffic lights. Not a clue why. Well our man found a lump of wood and made a slightly terrifying giraffe shaped object . Jayne loves it. She is very happy. 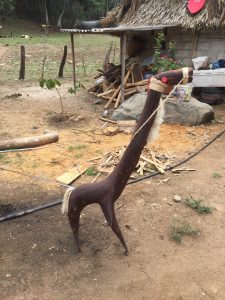 Our remaining chickens are getting larger and their new tail feathers are thankfully starting to cover their naked bums. Yes our remaining chickens. Good news is that Four out of Five are still with us. Sister Flowers (our first casualty) waited only a few days before going AWOL. She is probably in a snake or an Eagle. Sister Bricklebank did the walk of shame home after disappearing for a night or two. We had written her off too so there is an outside chance Sister Flowers will return but it’s unlikely.

Hummingbirds are all around us these past weeks. They announce their arrival with a loud buzz of invisibly fast wings. Although always somewhere close by the Summer flowers seem to be attracting them out in large numbers. They seems to be attracted to us whenever we use the outdoor shower where we get to watch them close up. Most of them are tiny but some surprisingly large. I managed to rescue a big one that was trapped in a friend’s house in town. Armed with a bar stool and a towel I wrestled the beast to the ground and set it free.

Humidity and much ginger puddling is requiring much rehydration. Yes a few beers during the football but mainly over carbonated flavoured water in impressive amounts. It’s essential to life. There are many choices available and just about every shop displays endless coloured bottles of chilled fluids to tempt you. Most are acceptable and a few actually rather good but there is always one sneaky option that will get you if you don’t pay attention. Carbonated water with a hint of cucumber. It’s high quality labeling and transparent bottle showing cold clear fizzy liquid with a touch of delicious cucumber suggests instant refreshment . You gulp the stuff down over a dry throat and get hit hard with an acrid aftertaste of feet and bile. Don’t do it. It’s very very bad.

My mates have now completed the first iteration of the Temple for Peace at the Mandela festival in the Netherlands. Huge success. It’s not been easy to be here while this has been in progress. Have missed the process of pain and achievement that projects of this size give you. These crazy buggers have pulled off something quite remarkable considering the time and budget restraints they had. Kudos. Next time … maybe. 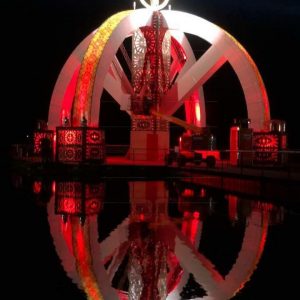 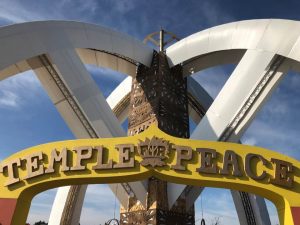 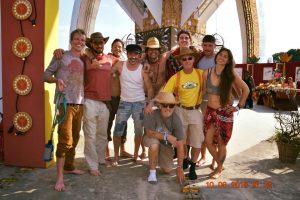 Our orchids are sprouting some green stuff everywhere but so far no flowers. Our efforts are not as successful as our friend in town who has been nurturing her orchids in a proper way and has been rewarded with chocolate orchid flowers. Each flower does indeed give off a strong aroma of Maltesers (other brand honeycomb chocolate treats available). She gifts us a load to see if we kill them. Our orchid nurturing needs a bit of work. 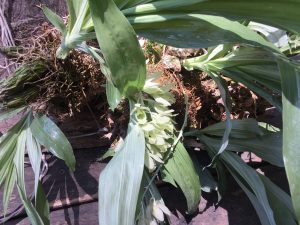 We have helped our friends do some projects on their new house while they were away in California. It’s gone rather well and they now have rustic railings throughout the property, a huge roof Palapa and a spiral staircase leading up to it. We are very happy how this has all worked out and even better so are they. We are delighted recipients of many gifts of gratitude , none more appreciated than a proper slap up feed at a proper posh French restaurant that we have lusted over but never fully indulged in . That well fed glow of being spoilt by perfectly executed food and wine stayed with us for days.

Of all our fabulous imported gifts my new amazing extendable hose pipe was a pretty close second to the French grub …. And close on its heels in the gratitude stakes was the frog pontoon bridge. Yes that is a real thing. The mini rains arrive again and kick off another loudly pornographic frog orgy . The aftermath is much less barbaric than before and we think that is partly due to the installation of the floaty froggy bridge thing, which allows the frogs a means of escape from the pool. Not being the brightest of creatures I had to rescue about half a dozen living frogs and remove a corpse or two but nothing like the previous after party. There was even one daft frog that was stuck under the pontoon bridge all day.  He escaped back into the pool and was removed in the traditional way. All in all a well tested and effective frog rescue device. 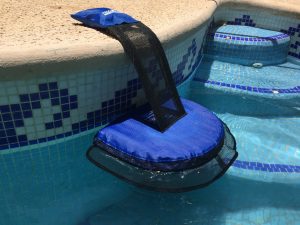 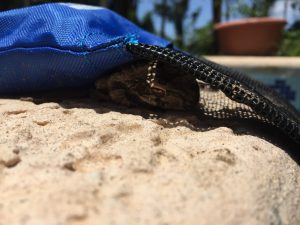 Mangoes bloody mangoes. We have about a million of them. Friends have added to our own modest collection with large buckets full. The mango trees are dropping the things by the ton. The miniscule but totally irritating fruit flies are gathering and something must be done. I spend a messy few hours on the balcony attacking an over spilling bin of them. I create a mass of compost and sticky stones and a surprising small amount of mango flesh. It is enough to create a gallon of mango puree and a very tasty mango and apple chutney. Now if only we could find some decent cheese to go with it …. 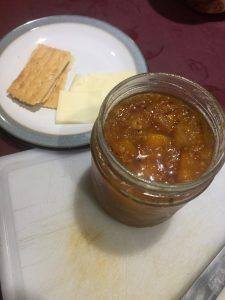 An important day arrives. It’s the most important day politically in Mexico in living memory. It’s Election Day. There is one leftish wing candidate representing anti-corruption, anti-Trump, for the people & redistribution of wealth and openly against the big business/cartels that have ruled Mexico for 70 years. Andrés Manuel López Obrador  or AMLO as he is known could change things here significantly. Bit like if Bernie Sanders had been allowed to win in the USA. He is widely tipped to win but has been here before and has at least two elections taken from him. In the last few weeks 120 of his colleagues have been murdered. There is a strong mood of opportunity to make a real change and the feeling that if democracy is not allowed to run its course this time there will be revolution. There is a large army presence around us and heavily armored road blocks outside of town. It’s a serious business. We stock up and keep our heads down.

There is a bizarre and ineffective law in Mexico that dictates before and during any political Election no alcohol can be sold or purchased. The bars and most of the restaurants in town are shut for the whole weekend. The World Cup is forgotten… till Monday when we play Brazil. We have a large group of friends over and we spend Election Day by the pool with supplies bought on Friday.

Morning arrives with the news that AMLO is the new Mexican president by a landslide. The feared violent backlash has not swept the country and we can all safely watch poor Naymar suffer great pain and agony tripping over daisies for Brazil and accept the inevitable as Mexico leaves the World Cup. Timing could not have been better as the mood of celebration after the election victory overrides everything. “ At least we won the big one!” 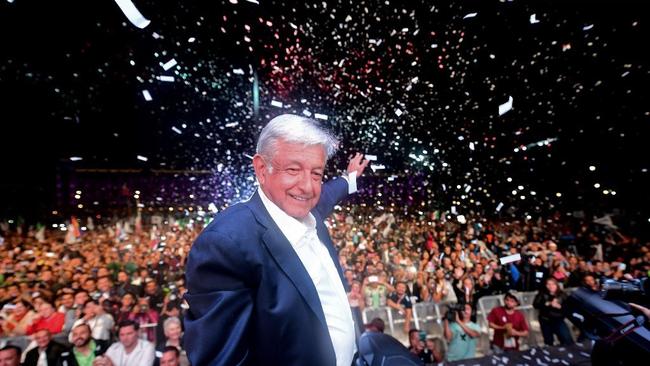 The mood for us is taken down a peg or three by the news that a friend of ours died in the night. Flavio was real character in the town and everyone who has spent time here knows him. He was 29 years old and died of an alcohol-induced heart attack. We attend a very emotional sunset remembrance ceremony for him at the place on the beach where he waited tables. Probably the worst waiter ever but a really welcoming young man with a beautiful heart. We will all miss him. 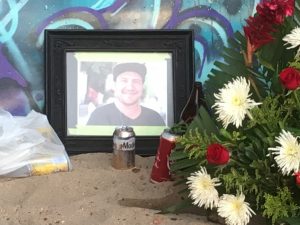 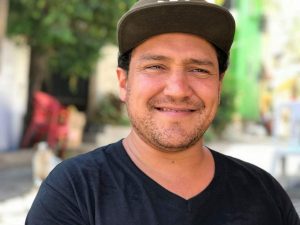 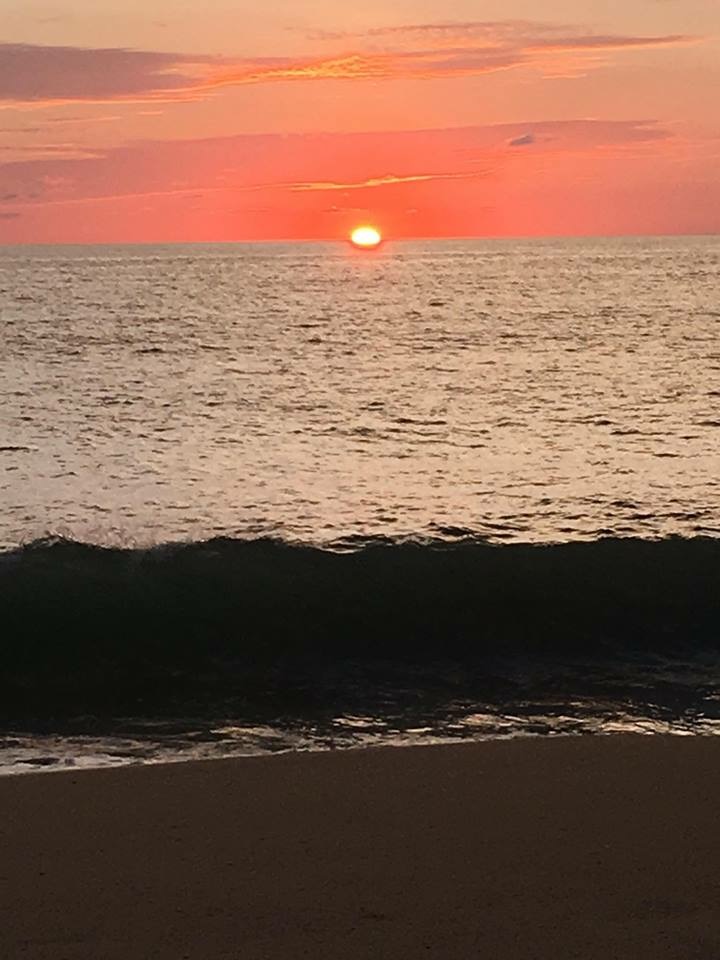 Spider Eyes and a Chicken Nunnery
The Cake Distraction 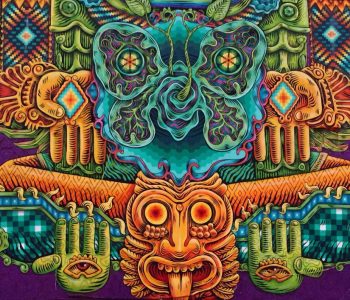 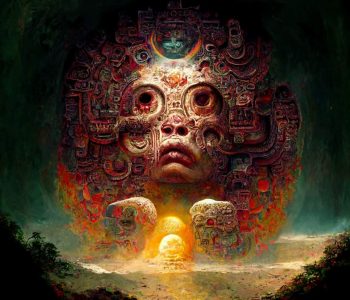 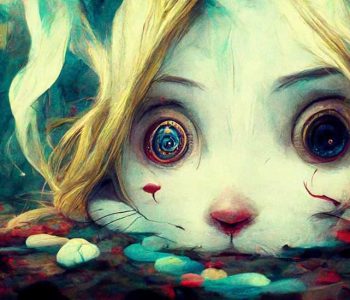 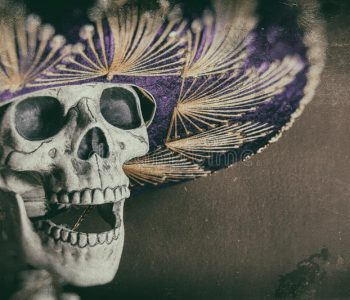 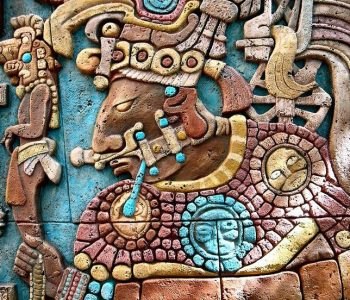 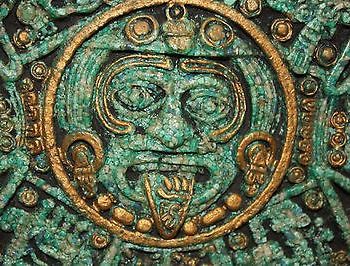 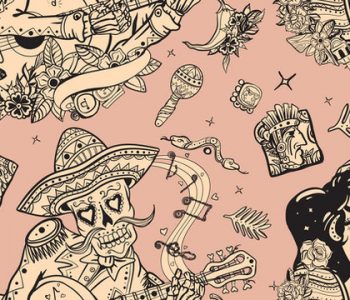 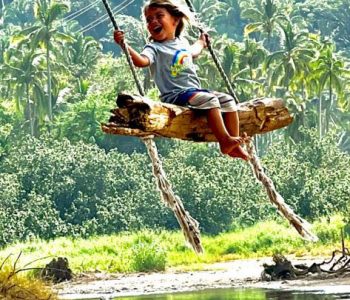 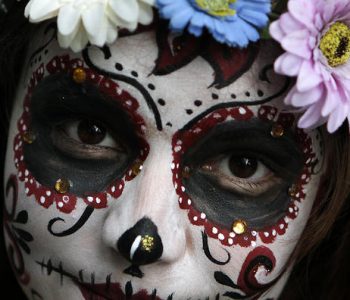 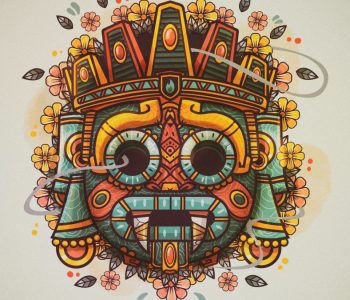